Church of the Transfiguration, Mount Tabor: One of the Crusader altars 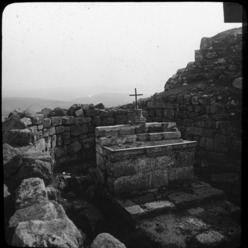 The Church of the Transfiguration is a Franciscan church located on Mount Tabor in Israel. It is traditionally believed to be the site where the Transfiguration of Christ took place, an event in the Gospels in which Jesus is transfigured upon an unnamed mountain and speaks with Moses and Elijah. The current church, part of a Franciscan monastery complex, was completed in 1924. The architect was Antonio Barluzzi. It was built on the ruins of a Byzantine (4th-6th century) church and a 12th century church of the Crusader Kingdom period. The church contains three grottoes belonging to the Crusader church. They were described by Jonas Korte, a publisher from Eldena, as “three chapels, with a small altar. They are called tabernacles, and they are said to represent the three huts which Peter desired to build, one for his Master (Jesus) the other two for Moses and Elias (Elijah)”.