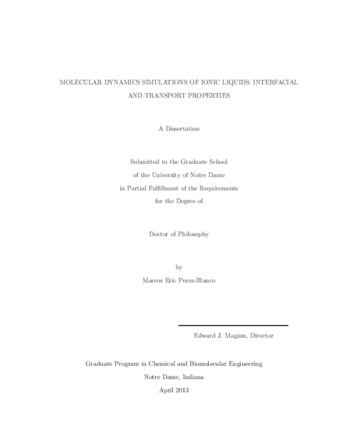 This thesis discusses the applications of molecular dynamics simulations to ionic liquids (ILs). Areas studied include transport properties in the bulk, liquid struc- ture, and transport as well as structural properties at liquid/vapor interfaces and liquid/solid interfaces. The ionic liquid- CO2 system is of interest because ionic liq- uids have potential to be used for CO2 capture. Using classical molecular dynamics simulations, the vacuum-liquid and CO2 gas-liquid interfaces of the ionic liquid 1- n-butyl-3-methylimidazolium bis(trifluoromethylsulfonyl)imide ([bmim][Tf2 N]) have been studied at a range of temperatures and pressures. Interfacial ordering and ori- entational tendencies of the ionic liquid at the vacuum interface generally agree with previous experimental and simulation studies. The interfacial structure of the IL re- mains relatively unperturbed when the liquid is in contact with CO2 . CO2 adsorbs rapidly onto the liquid interface, forming a dense layer. Diffusion into the bulk occurs on a much slower timescale. Interfacial fluxes and diffusivities were determined. The potential of mean force for interfacial crossing, and corresponding residence time dis- tributions of interfacial crossing events of CO2, were also calculated. CO2 desorption from the liquid was also simulated. A high density CO2 layer forms for desorption with CO2 present, but not for desorption into a vacuum. The interfacial behavior and transport dynamics have been characterized by studying these properties. A viscosity screening study has been performed to identify ionic liquids with low viscosity for use in refrigeration systems. The focus was on phosphonium and sulfonium triazolide ionic liquids. Molecular diffusivity was used as a surrogate for the viscosity, in order to allow efficient use of computational resources to screen a large number of liquids. The effect of different chemical structures and functional groups on liquid structure has been studied, and relationships between liquid structure and viscosity has been ex- plored. Ether functional groups were effective in reducing viscosity only when placed near the phosphorus atom of the cation. This reduced viscosity appeared to be related to homogenization of the liquid structure by the ether groups. Sulfonium cations also showed a lower viscosity, possibly due to a more homogenious liquid structure caused by the distribution of the positive charge from the sulfur to the surrounding atoms. Additionally a study of the behavior of an ionic liquid, 1-ethyl-3-methylimidazolium triazolide (emim-TZL), under confinement was studied with MD simulation. Two different crystal faces of the Al2 O3 crystal were used for confinement. Structure of the liquid at the interface and near the interface were studied. Additionally graphical representations of the interfacial configuration are shown, which show how the IL molecules organize relative to the crystal surface.