Foundations of Science in the Post-Classical Islamic Era: The Philosophical, Historical, and Historiographical Significance of Sayyid al-Sharīf al-Jurjānī’s (d. 1413) Project 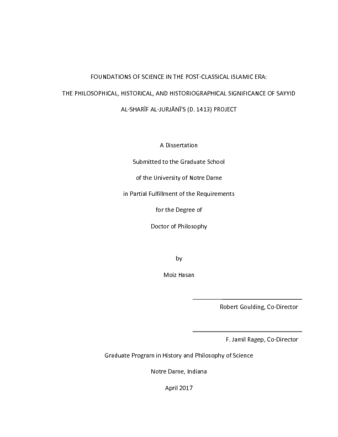 This dissertation examines the foundations of scientific knowledge, and its philosophical, historical, and historiographical significance, in the relatively understudied post-classical Islamic era (post-1100 CE). By focusing on the epistemological underpinnings of science, such a study can reveal much about the nature, attainability, and justifiability of scientific knowledge. Moreover, studying the foundations can shed light on how scientific knowledge is situated in relation to developments in other intellectual fields. Thus, it can prove valuable for addressing significant historical and historiographical questions concerning the cross-fertilizations between different fields and the tenor of intellectual thought in post-classical Islamic societies.

My work addresses these themes by providing the first book-length treatment of the views of Sayyid al-Sharīf al-Jurjānī (d. 816/1413), one of the most distinguished theologians of Islam, who was equally acclaimed for his scientific and religious works, and who was centrally interested in issues concerning the foundations of scientific knowledge. This study details Jurjānī’s vision of the mathematical sciences, including astronomy, and its epistemological underpinnings. It shows how Jurjānī’s methodical thinking draws from intellectual sources as diverse as theology, philosophy, jurisprudence, and Sufism, the extent and nature of cross-fertilizations between these traditions, and the manner in which Jurjānī can combine different approaches to knowledge into a coherent epistemological scheme.

Of significant philosophical import is the contribution Jurjānī makes in resolving two problems in the philosophy of science of his time: the status of mathematical entities, and that of astronomical models and their relation to reality. This study demonstrates that Jurjānī’s solution lies in the specific manner he addresses epistemological issues concerning knowledge, truth, and reality, its distinctive feature being a turning away from the Avicennian theory of true knowledge based on the Active Intellect to a more “economical, human-centered epistemology”[1] built on his novel understanding of the key concept of nafs al-amr (lit., the thing itself). Finally, equally significant is the historiographical import of Jurjānī’s project in the form of providing specific evidence that cut through many of the prevalent grand narratives that often belittle philosophical activity in the post-classical Islamic era, or posit essentialist (often antagonistic) relation between Islam and science.