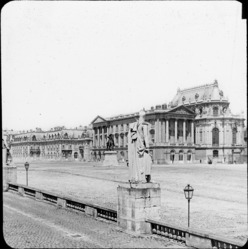 The wing of the palace terminates in the Pavillon Gabriel, to the left of the Royal Chapel.