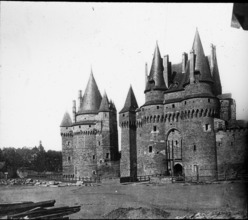 The Place du Château, outside the castle, used to be the castle forecourt where stables and outbuildings were located.

Part of a feudal buffer zone known as the “Marches of Brittany”. A castle has existed here since 1000; a stone castle was built in 1070 by Duke Robert I on the current site. In the 13th century, the castle was enlarged and equipped with robust towers and curtain walls. In the 15th century, the castle was modified to keep up with developments in artillery design. It was decommissioned from a military post to become a comfortable residence for Jeanne of Laval-Châtillon and her son Anne de Montmorency. The Renaissance oratory dates from 1530. In 1872, it was one of the first castles in France to be classified as a monument historique (historic monument) and restored from 1875.