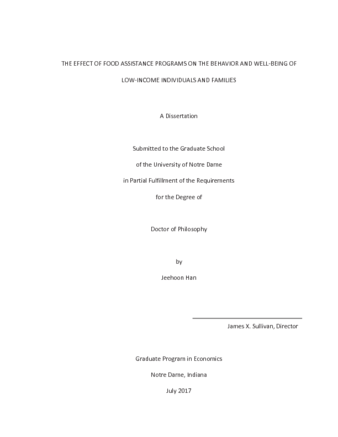 This dissertation consists of three essays that explore the impact of Supplemental Nutrition Assistance Program (SNAP) on low-income individuals and families’ well-being and behaviors. In chapter one, I examines whether expanding SNAP eligibility reduces material hardships of low-income households. During the Great Recession, many states expanded the income threshold of eligibility for SNAP. I show that expansions in eligibility increased the SNAP participation rate by 3–5 percentage points. I also find that the expansion leads to a modest decrease in non-food hardships, such as rent and utility delinquencies. However, the increase in SNAP enrollment does not lead to greater food spending or a reduction in food insecurity except for households with children.

In chapter two, I investigate the interactions between health and nutritional assistance programs such as Medicaid, SNAP, WIC, and school lunch programs. Exploiting the variation in SNAP eligibility across states and over time, I find strong evidence of program interactions: when a state moves from the federal rule to the most extensive SNAP eligibility rule, enrollment in free school lunch increases by 4 percentage points. I estimate that the federal government spends an additional 37 cents on the school lunch program for each dollar spent on SNAP due to the expansion. However, expanded eligibility for SNAP leads to a significant decrease in private insurance coverage for both adults and children, which is not fully explained by an increase in Medicaid enrollment. Exploring potential channels through which SNAP expansions affect participation in other safety net programs, I find evidence that automatic eligibility, and a reduction in employment, play a role in program interactions.

In the final chapter, I investigate whether waiving SNAP work requirements affects the labor supply of low-income Able-Bodied Adults Without Dependents (ABAWDs) by exploiting variation in the areas waiving work requirements as well as the age criteria for the work requirement. Consistent with prior research, I find no significant effect of the ABAWD waiver on ABAWDs’ work effort. However, using SNAP administrative data, I find evidence that the implementation of the ABAWD waiver leads to a substantial increase in SNAP caseloads.