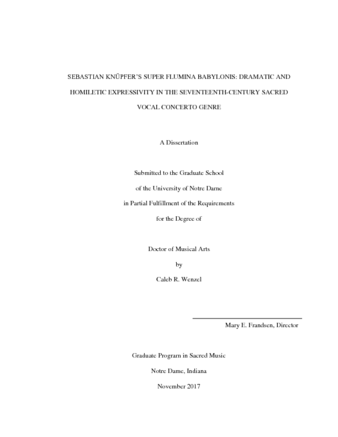 Scholars and performers of seventeenth–century music have long been aware of Sebastian Knüpfer (1633-76) and his place in the history of the city of Leipzig and its famous Thomaskirche. Knüpfer served as the cantor of the Thomasschule and city music director from 1657 to his death in 1676, which places him in a storied lineage that includes such eminent composers as Johann Hermann Schein (1586-1630) and Johann Sebastian Bach (1685-1750). Yet, even though his place in the history of the city and one of the city’s two principal churches is well-established, his music remains virtually unknown, particularly in the United States. To date, only a handful of Knüpfer’s one-hundred twenty known works are available in modern performing editions, and only a handful of recordings of his works have been produced worldwide. Moreover, analytical models for his music are extremely underdeveloped. The general lack of attention to Knüpfer’s work has obscured his rightful place in history as a master of the sacred vocal concerto, the dominant genre of sacred music in the seventeenth century.

To begin to remedy this dearth of study on the music of Knüpfer, I examine a small portion of his oeuvre, the Latin psalm concertos, in the broad context of his entire output, in order to draw out the salient stylistic features of his musical language. From among this collection of works, I closely examine one Latin psalm concerto, Super flumina Babylonis, from the perspective of musical language and theological content. Close analysis of this work demonstrates Knüpfer’s exertion of formal control in the sacred vocal concerto as a means of managing dramatic narrative while at the same time suggesting his own theological perspective. My analytical approach further demonstrates the necessity for more focused attention on Knüpfer’s individual compositions and groups of works in the same genre, and for studies that compare his works to the sacred vocal concertos of other prominent composers of the period. Finally, I provide a modern performing edition of Knüpfer’s Super flumina with a critical commentary.