Writing the Cistercian Office in the Thirteenth Century Low Countries 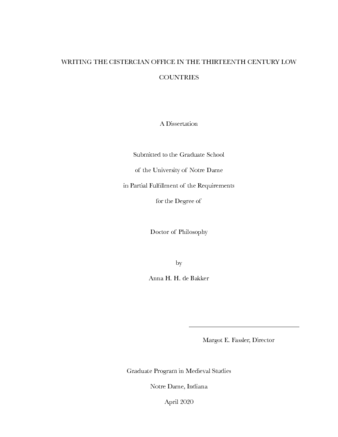 Many studies of the chant of the Cistercian order have focused on the order’s early roots in twelfth-century France. This study instead considers their activities in the thirteenth century in the area around the diocese of Liège, where Cistercians were instrumental in promoting the religious activities of laybrothers, beguines, anchoresses, and nuns. This dissertation argues that the liturgical office was an essential genre of history-writing for Cistercians, and articulates the methods by which individual office-writers could use the office to promote new cults and feasts.

This dissertation discusses several chant offices originating in the religious landscape of thirteenth century Liège, as well as their manuscript sources. First, this study considers the techniques for office writing present in the office for the order’s most prominent early saint, Bernard of Clairvaux. Subsequent chapters examine how these techniques, and other like them, manifested in later Low Countries offices. The office written at Villers for the Cistercian laybrother Arnulf shows a consistent process for writing the office that is organized around direct citations from Arnulf’s Vita and quotations from the book of Ecclesiasticus. Each text is carefully arranged by genre and placement in the office. Although Arnulf’s office is accompanied in the same manuscript by an office for Marie of Oignies, a close study of the respective practices of the two offices reveals very different approaches to scriptural text and to composition of melody. Knowledge of the methods by which each office-writer worked complicates the narrative of authorship of these two offices, and suggests Marie’s office may have originated outside Villers. Offices for Katherine and Ursula and the Eleven Thousand Virgins compiled at the convent of Beatrice of Nazareth demonstrate that embellishment and arrangement of borrowed material was also a method of office-writing available to new Cistercian convents. Finally, detailed examination of the Cistercian office for Corpus Christi clarifies the chronology of the celebration of this feast, and indicates that while Cistercians used many wide-spread texts, they had a strongly-held sense of musical rhetoric that affected their use of borrowed material. Taken together these case studies present a methodology for understanding the process by which communities enacted historical and theological ideals through music and liturgy.