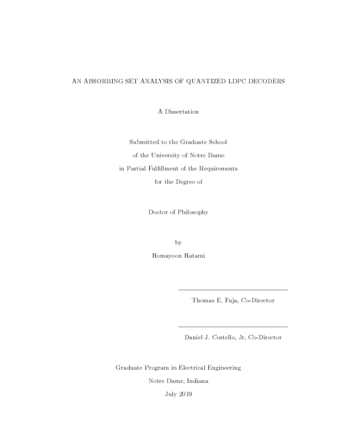 The performance of low-density parity-check (LDPC) codes at high signal-to- noise ratios (SNRs) is known to be limited by the presence of certain sub-graphs that exist in the Tanner graph representation of the code, for example trapping sets and absorbing sets. This dissertation derives a lower bound on the frame error rate (FER) of any LDPC code containing a given problematic sub-graph, assuming a particular iterative message passing (MP) decoder and decoder quantization. A crucial aspect of the lower bound is that it is code-independent, in the sense that it can be derived based only on a problematic sub-graph and then applied to any code containing it. Due to the complexity of evaluating the exact bound, assumptions are proposed to approximate it, from which we can estimate decoder performance.

MSA, AMSA, and OMSA at both low and high SNRs. The new decoding algorithm is designed based on the common assumption that trapping sets are the major cause of the error floor for quantized LDPC decoders, and it is shown to reduce the error probability associated with these problematic graphic objects. The lower bound analysis tool noted above is then used to verify the effectiveness of the new TAMSA (TOMSA) and also to assist in finding its optimum design parameters. We also show that the implementation complexity of the TAMSA (TOMSA) is only slightly higher than that of the AMSA or OMSA.

Finally, we extend the lower bound to sliding window (SW) decoding of spatially coupled LDPC (SC-LDPC) codes. Additionally, we show that the performance of the TAMSA (TOMSA) is better than that of the MSA, AMSA, and OMSA for SW.