Roman ruins at Djemila: Remains of theater building (the scaena), seen looking down from the sloped seating (the cavea) 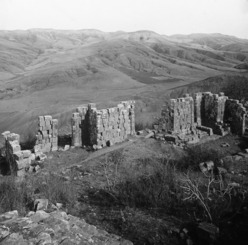