Practice What You Preach: A Consideration of Augustine's Rhetorical Style in Enarrationes in Psalmos 69 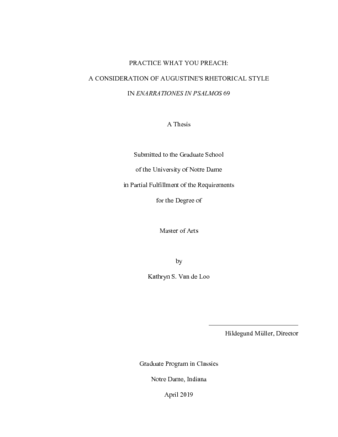 The question of whether and in what ways Augustine follows his own guidelines for preaching in the three styles can be illuminated by a close reading of Enarrationes in Psalmos 69, a transcript of a sermon preached by Augustine. Chapter one of this paper explores Augustine’s description of each style and examines excerpts from En. Ps. 69 that adhere to his descriptions, asking whether the three styles are, in fact, able to be distinguished from one another. Chapter two considers one specific aspect of style, prose rhythm, to determine how Augustine uses it as he preaches, and whether it helps him achieve his goals in preaching. Chapter three examines the overarching structure of the sermon, showing that he views his task primarily as an exultation of the martyrs rather than simply an exegesis of Psalm 69. Each of these inquiries sheds light on the question of how well Augustine’s practice of preaching adheres to his ideas as outlined in de Doctrina Christiana.