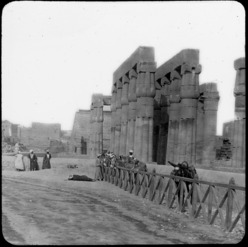 Luxor [now al-Uqsr] is the site of a temple dedicated to the god Amun, on the east bank of the Nile, 3 km south of Karnak. It was constructed and decorated primarily during the reigns of Amenophis III [Amenhotep III] and Ramesses II Ramses II. The earliest remains at the site date to the time of Hatshepsut, who built six way-stations for the bark of Amon-Re along the processional avenue bordered by sphinxes that connects Luxor and Karnak. The stone blocks of the southernmost way-station survive, reused in the triple bark shrine of Ramesses II. Amenophis III built the original stone Temple of Amun (known to the ancient Egyptians as Ipet-resyt) on a platform. He later added a court and laid the foundations for a colonnade which was completed and largely decorated by Tutankhamun (reigned ca. 1332-ca. 1323 BCE). Ramesses II added the first court and pylon. The sanctuary of the temple, in which the bark of Amun was placed, was rebuilt by Alexander the Great (reigned 332-323 BCE), with reliefs in typical early Ptolemaic style. From the 4th to the 6th century CE, the cult of the Roman emperors was celebrated in a decorated vestibule to which an apse was added. The Roman paintings, although still visible, are now severely damaged. Luxor was also considered to be the birthplace of Amon-Re, the aspect of Amun worshipped at Karnak. During the national observance of the Opet Feast, the world was thought to be regenerated and cosmic order re-established by the rites accompanying the annual rebirth of Amon-Re. These miracles were accomplished by the ritual renewal of divine kingship, symbolized first by the re-enactment of the reigning monarch’s divine conception, which assured his possession of the royal ka (divine spirit), and second by the recrowning of the king, which confirmed the legitimacy of his reign.