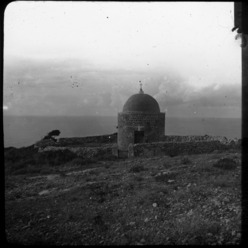 The Carmelite order was founded on Mount Carmel more than 800 years ago, starting from a number of Crusaders who went into seclusion in the caves on Mount Carmel, in imitation of the Prophet Elijah, who meditated in a cave here before defeating the priests of Baal. The 17th century monastery was destroyed by the Ottomans after Napoleon’s siege of Acre and rebuilt 1827-1836. Elijah’s Cave is in a separate domed shrine further down the slope and is sacred to Jews, Christians, Muslims, and Druze; at times it has been a mosque.