The Politics of Policy Diffusion: Party Organization versus Individual Motivations in the Diffusion of Participatory Budgeting in Brazil 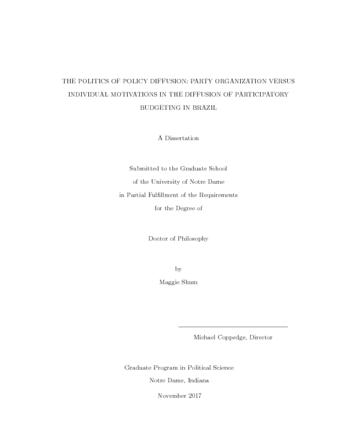 Participatory budgeting (PB) has diffused from Porto Alegre, a city in southern Brazil, to many countries across the globe over the past three decades. While both scholars and practitioners are interested in studying its potential to improve democratic quality and living standard, the question of how PB has diffused within Brazil has not been well understood. This dissertation focuses on how PB – a program that is heavily associated with the Workers’ Party (PT) and the leftist values it embraces – managed to spread across Brazil, adopted by politicians from both the left and the right.

This study relies on a multi-method approach that brings together quantitative and qualitative data from Brazilian municipalities. I constitute a theory of diffusion that takes into account the various pathways in which diffusion can occur with the Brazilian experience of PB. I depart from the policy diffusion literature that predominately focuses on individual-driven motivations to explain diffusion. Instead, I emphasize the role of institutional settings, in particular party organizations, in conditioning the type and scope of policy diffusion.

Characterized by a hierarchical structure, institutionalized channels that connect members both horizontally and vertically, a clear and consistent platform, high level of internal cohesion and discipline, strong party organizations have the prerogative over their members’ behavior and decision-making power. The upper echelons of the party leadership are the arbiters that decide the strategy and direction of the party. This shapes the range of policy options available to politicians, and limits their decision-making autonomy. I posit that diffusion under these settings tends to be party-driven. First, parties function as an information filter and a yardstick to screen out policies that are incongruent with their platform and image. Second, once a policy is identified and embraced by the leadership, the interconnected organizational channels allow the directives from the top to reach down to the units at sub-national levels. The diffusion of PB under the Workers’ Party (PT) over the past three decades illustrates how the party organization can enhance and also slow down the diffusion process.

On the other hand, weak party organizations are characterized by a decentralized structure and a lack of formal communication channels that link members from different levels. Party platform and brand are inconsistent, as politicians do not rely heavily on them to secure votes. Lastly, internal cohesion and discipline are weak. As a result, weak parties do not exert heavy control over their members, and politicians enjoy a high degree of decision-making autonomy. The diffusion mechanisms are more individual-driven, relying more on the politician’s own attributes and self-regarding goals. Thus, the absence of party being the gatekeeper of information creates a favorable condition for heterophilous diffusion – the diffusion of ideas to dissimilar social groups or networks. However, this agency comes with a catch: politicians are constrained by their cognitive capacity and resources to learn and decided about the policy innovation in a short time horizon. Rather than assuming the perfect information and pure rationality, I use the bounded rationality framework to explain the adoption of PB by non-leftist politicians.