Versailles: Hameau: Back of the "Tour de Marlborough" 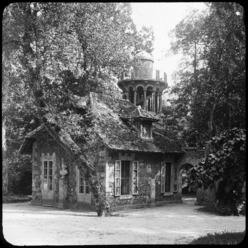 The front of the building with its little observation tower overlooked the artificial lake.

Mique was a landscape designer of some note, and from 1783 to 1785, with technical advice from Hubert Robert, he worked on the Hameau at the Trianon, a group of cottages by an artificial lake where Marie-Antoinette and her ladies played at being villagers. He built another hamlet for the Mesdames de France at Bellevue (destroyed). The group of 12 peasant houses were made of cob and roofed with tiles or thatch, built by Mique from 1783 to 1785: they include the Moulin with its waterwheel, the Boudoir, the Réchauffoir, the Maison du Billard connected to the Maison de la Reine by a wooden gallery, the Colombier, the Maison du Garde, the Tour de Marlborough and the Laiterie de Propreté. The Grange, which served as a ballroom, and the Laiterie de Préparation have disappeared.