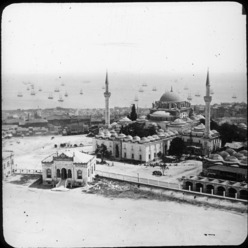 Shows the many ships in the Bosphorus Strait and the natural harbor known as the Golden Horn in the distance.

The Bayezid II Mosque is an Ottoman imperial mosque located in the Beyazıt Square area of Istanbul, Turkey, near the ruins of the Forum of Theodosius of ancient Constantinople, commissioned by Bayezid II (1447-1512). The surrounding külliye complex (madrasah, primary school, imaret (public kitchen) and hammam), date from 1501 to 1506. The dome was partially rebuilt after an earthquake in 1509, and Sinan conducted further repairs in 1573-1574. Below the garden is an arcade of shops whose rents were originally intended to support the mosque. This arcade was designed by Sinan in 1580 and extensively restored in the 1960s. The former public kitchens of the mosque was converted into the State Library of Istanbul by Sultan Abdulhamid II in 1882 and houses over 120,000 books and 7000 manuscripts. Likewise, the former madrasah now houses the Istanbul Municipal Library.