Committing to Equality: Essays on Distributive Justice, Community, and Economics 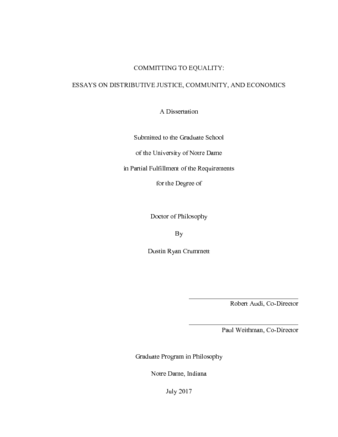 In this dissertation, I argue we have reasons acceptable from a wide range of theoretical perspectives to be fairly intolerant of economic inequality. Some of these reasons are often not appreciated, or not appreciated in their full force, by those who occupy those theoretical perspectives. In Chapter I, I defend a modified version of the popular argument that economically egalitarian distributive policies are justified partly because they allow us to communicate equal respect and concern for the worst off. What I say there will also have implications for many issues besides distributive justice, and I will gesture at some of these. Chapter II begins by arguing that being too rich probably tends to be bad for people. I then argue that very rich would probably be better off in a more egalitarian society which prevented them from becoming so rich. The political implications of this conclusion will be most obvious for utilitarians and others who think that distributive justice is intimately related to making people better off, but I’ll also discuss some reasons why other people should find this conclusion interesting, even if they don’t think it justifies preventing people from becoming extremely rich. Chapter III argues that the reasons Rawls gives for accepting the difference principle should have led him to endorse another principle which allows less inequality than the difference principle does. Chapter IV discusses social egalitarianism, the view, held by figures like Elizabeth Anderson, Philip Pettit, Samuel Scheffler, and many others, that social justice obtains when the members of a society stand in relations of equality with each other. I argue that the considerations which motivate social egalitarians should lead them to be less tolerant of economic inequality than many have in fact been. I also argue that these considerations perhaps should have lead Rawls to endorse a constraint on economic inequality which he did not endorse and which is distinct from the one defended in Chapter III. If that’s right, there are therefore potentially two different ways in which Rawls failed to be as economically egalitarian as, by his own lights, he should have been.