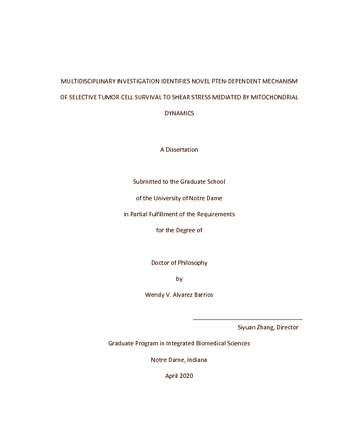 During metastasis, tumor cells dissociate from the primary tumor, disseminate through the vasculature, arrest in the capillary bed, and colonize secondary organs. Although at all of these stages surviving tumor cells hold a potential for colonization, mechanical arrest is particularly important since cell entrapment is absolutely necessary for tumor outgrowth. However, the subcellular response of circulating tumor cells (CTCs) to the extreme shear stress exerted during transit through the vasculature prior to and during mechanical arrest remains largely unknown. In this work, we present an integrative platform that combines the use of a microfluidic device and a computational model. Together, they serve as a tunable system to reliably reproduce the mechanical arrest of tumor cells and quantitatively determine their physical response to precisely controlled shear stress. The design of our platform is based on biological observations of CTC arrest within the mouse brain microcapillary bed, and was validated to be physiologically relevant for the animal model used. Using this platform, we show for the first time, an insight into subcellular responses of CTCs at the stage of mechanical arrest. We found that during mechanical arrest single tumor cells experience extreme morphological deformations, an increase in membrane stress, and increased mitochondrial fission, all dependent on the magnitude of fluid shear stress applied. In this work, we demonstrated for the first time that shear stress can trigger mitochondrial fragmentation in CTCs, followed by increased cleavage of PINK1, which together serve as a self-protective mechanism to inhibit mitochondrial clearance. A key finding presented in this work is the regulatory role that PTEN has on maintaining the mitochondrial network structure and continued mitophagy. Loss of PTEN resulted in increased mitochondrial fission and Parkin downregulation, which together with the cleavage of PINK1 demonstrate enhanced protection from mitophagy upon exposure of CTCs to shear stress, suggesting it as a self-protective mechanism to inhibit mitochondrial clearance during transit through the vasculature and mechanical arrest. Although not fully investigated in this work, mitochondrial fission is speculated to be Drp1 independent. An interesting finding was the loss of viability in PTEN deficient CTCs, which opposes the protective role that mitochondrial fragmentation and mitophagy inhibition offer. Our data suggests that loss of PTEN may induce an increased fragility in plasma membrane upon exposure to shear stress, while simultaneously activating pro-survival mitochondrial dynamics. Together, our investigation brings out a novel mechanism where CTCs show an adaptive response to shear stress through remodeling of mitochondria and inhibition of mitophagy, and where loss of PTEN plays an essential role modulating Parkin expression to sustain cell viability during transit through the vasculature and mechanical arrest.