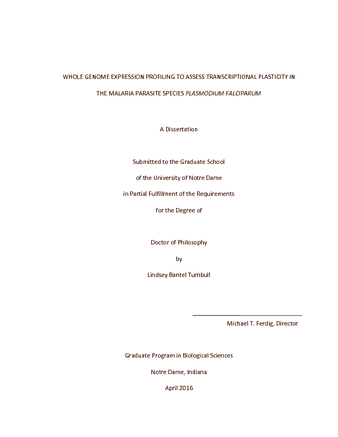 Despite the lofty goal of eradication, malaria is one of the leading causes of mortality in Sub-Saharan African children. Significant reduction in the number of annual deaths have been realized in recent years due to the widespread use of artemisinin combination therapies. Recent reports from the Thai/Cambodia border clearly show the emergence of artemisinin resistance, re-emphasizing an urgent need to prevent or slow the spread of drug resistance. Success in this endeavor will require deeper understanding of the basic biology and adaptation mechanisms of the malaria parasite. Much of this biology is complex, subtle, and currently unexplored.

Gene expression is a crucial step in the process of turning DNA into observable phenotypes like drug resistance. Transcriptional regulation is a malleable process; responsive to changes in DNA sequence, environmental fluctuations, and alterations in the overall abundance of many other cellular and molecular components. Variation in transcript levels, even among genetically identical individuals, provides an important foothold for adaptation and evolution. To explore some of the mechanisms that contribute to parasite adaptation, I investigate variation in transcript abundance within single clone cultures and the role differential variation may play in the parasite fitness and competitive growth.

This dissertation describes previously unrecognized features of gene expression in the malaria parasite. Chapter 2 comprehensively evaluates several sources of variation and quantifies the contribution of each source to the total variation for each gene in Plasmodium falciparum. This variation is then repeatedly measured for parasite clones across the parents and progeny of a genetic cross in Chapter 3. In this chapter, the heritability and regulatory elements that contribute to transcriptional variation are characterized at the level of individual genes using quantitative trait loci mapping. Chapter 4 investigates the genotypic and transcriptional changes that accompany drug selection, and how these changes impact in vitro parasite fitness for single clones and multiple clone cultures.

Cumulatively, this project addresses the hypothesis that existing variation in gene expression, both among parasite cells with identical sequences, and between genetically distinct parasite strains, provides a foundation for malaria parasites to adapt to new environments.