Does Rumination Have Adverse Interpersonal Consequences? A Test of an Emotion-Dysregulation Extension to Stress-Generation Theory in Depression 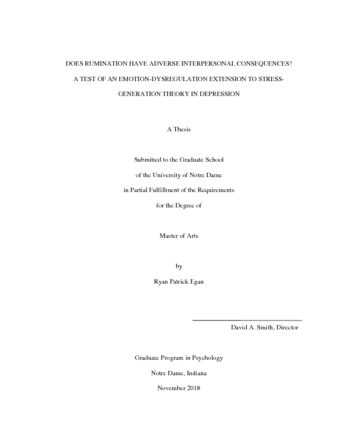 Stress-generation theory posits that depressed individuals behave in ways that cause stress in their relationships, reducing the quality of social support available to them and thereby maintaining their symptoms. The present study proposes an extension to the existing stress-generation framework to include emotion dysregulation as a precursor to interpersonal stress. In a sample of 135 pairs of same-sex friends, I conducted an experimental test of two predictions: first, that individuals induced to ruminate will be rated poorer in interpersonal functioning during a discussion with a friend than individuals induced to distract themselves; and second, that friends will ruminate more during discussions with individuals induced to ruminate versus distract themselves. These predictions could not be tested adequately due to failure of the emotion-regulation manipulation to produce differential levels of negative mood. Exploratory analyses revealed that higher state rumination predicted lower subsequent state rumination in friends.