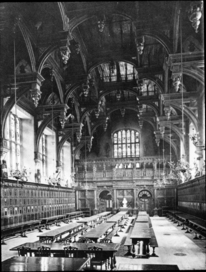 The Middle Temple is one of the four Inns of Court exclusively entitled to call their members to the English Bar as barristers. It is located in the wider Temple area of London, near the Royal Courts of Justice, and within the City of London. Construction of Middle Temple Hall began in 1562 and was completed in 1572, The hall survived the Great Fire of London in 1666, but was damaged by bombing in the Second World War. The Hall is called the finest example of an Elizabethan Hall in London.