Sympathy and Empathy for a Rival Lover: A Comparative Study of Chariton's Callirhoe and the Acts of Andrew 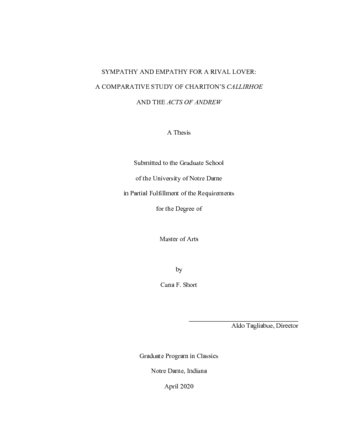 This thesis contributes to the comparative study of ancient novelistic literature by examining the characterization of the primary rival lover figure in Chariton’s Callirhoe and the Acts of Andrew, two Greek novels dated to the first through third centuries CE. In Chariton’s Callirhoe, this rival lover is Dionysius, whose love for and marriage to the novel’s female protagonist – Callirhoe – temporarily prevents her from being reunited to her first husband and lover, Chaereas. In the Acts of Andrew, the central rival lover is the pagan husband Aegeates, who is a “rival” insofar as he is an enemy to the apostle Andrew (the story’s protagonist) and his wife’s unwanted lover.

This study explores features of Dionysius’ and Aegeates’ characterization that lead readers to empathize or sympathize with them. In my analysis of empathy, I adopt the recent cognitive approach to narrative immersion, which refers to the reader’s mental state of being absorbed in the narrative world such that she may experience it as if it were the actual world. In my analysis of sympathy, I examine instances of mediated sympathy (i.e., sympathetic in-frame reactions towards the rival) alongside passages that portray the rival’s suffering as not primarily caused by his own culpable actions.

This thesis advances comparative scholarship on the ancient novels by demonstrating that similarities between the Greek novels and Apocryphal Acts are not limited to motifs and themes, but extend to narrative strategy. This study also contributes to a recent trend within scholarship that reassesses the literary quality of these texts. By showing the complexity of Dionysius’ and Aegeates’ characterization, this study challenges the established scholarly view that ancient novelistic characters lack any kind of depth. Furthermore, this study demonstrates the usefulness of the distinction between “sympathy” and “empathy” in reader-response approaches to the ancient novels and Christian Apocryphal Acts.