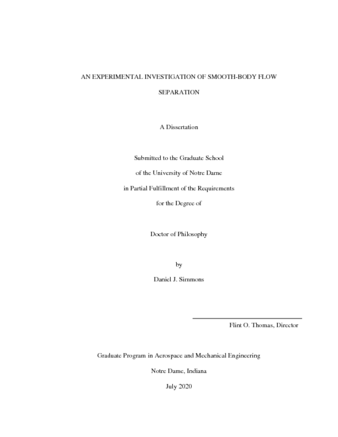 The accurate and reliable simulation of smooth-body turbulent flow separation represents a considerable challenge for current CFD turbulence models. Consequently, there has been a recent push for high quality, experimental, benchmark flow separation studies to be conducted for the purpose of CFD validation. This dissertation documents a series of benchmark experimental studies on smooth-body flow separation. Three flow experiments are investigated over a single two-dimensional ramp geometry—two undergoing flow separation (one larger-scale and one smaller-scale) and one attached flow—all of which result from a user-imposed adverse pressure gradient (APG) applied to a turbulent boundary layer. These data sets and associated documentation are now available on the NASA Langley Research Center Turbulence Modeling Resource website. Although the geometry and incoming flow in these experiments are spanwise two-dimensional in the mean, oil-film surface flow visualization shows that in each case separation is three-dimensional in character while reattachment is two-dimensional. Utilizing multiple flow visualization images, both surface and off-surface topology maps of separation were created. These maps indicate that the central flow separation is characterized by the owl-face pattern of the fourth kind. It is found that this pattern is an ubiquitous feature of flow separation. Additional investigation revealed that this owl-face pattern is part of a generic and simple structure consisting of a repeating pattern of saddle points and foci for separation and nodes and saddle points for reattachment. The pattern results when the streamwise surface curvature induces a small secondary flow, which interacts with the wind tunnel sidewalls. Furthermore, passive flow control studies reveal that, while the centerline flow separation extent is highly influenced by the sidewall separation, its characteristic separation structure is independent of the sidewall separation.

Extensive off-surface flow measurements, conducted via two-component LDV, were used to characterize the streamwise and spanwise flow development. Despite its three-dimensionality, the streamwise mean flow develops in a typical fashion—becoming inflectional due to the imposed streamwise APG—resulting in the formation of an embedded shear layer. Attempts to scale the flow using embedded shear layer scaling highlight that, while the mean profiles exhibit excellent collapse, the scaled turbulent stress profiles do not exhibit collapse due to streamwise surface curvature effects. Furthermore, experimental evidence is provided indicating that the Reynolds stresses are effectively “frozen”, with streamwise changes resulting from a rotating local wall-normal coordinate. A coordinate system fixed at the no-curvature transition from convex to concave ramp curvature yields turbulent shear stress magnitudes that are constant with streamwise development.