Roman ruins at Djemila: Remains of an arched gateway and street 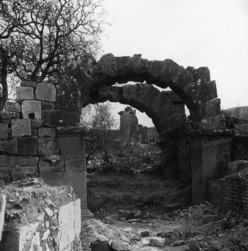