Temple of Seti I, Abydos: View looking down between first and second colonnade, second hypostyle court 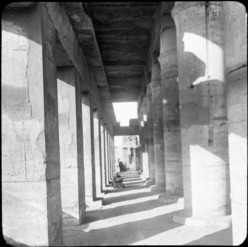 Abydos (Araba al-Madfuna) was the necropolis of This, the seat of the first two Egyptian dynasties. As the country’s most ancient capital, it remained significant throughout Egyptian history, becoming the principal cult centre of Osiris, a funerary deity who embodied the tradition of kingship. It was visited by pilgrims until Roman times (30 BCE-395 CE). The temple complex of Seti I [Sethos I, died 1279 BCE] was built on entirely new ground half a mile to the south. The underground cenotaph of Sethos I at the rear of the temple is commonly known as the Osireion.