Avignon Cathedral: Sculptural group of the Calvary on the terrace of Notre-Dame-des-Doms 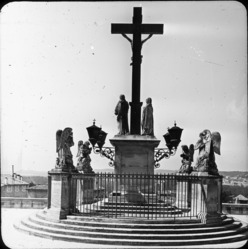 Virgin and St. John at base of cross with Christ, surrounded by four angels.Current photos show the grouping, but originals are now in Musée du Petit-Palais (?)

Probably it was essentially completed at the time of its consecration in 1101. The unaisled nave has five bays covered by a broken barrel-vault, with the exception of the easternmost bay, which carries a cupola and an octagonal lantern (probably added around 1130.) The west entrance porch was built in the late 12th century and leads into a barrel-vaulted narthex bay surmounted by a tall bell-tower, which was rebuilt in the 17th and 19th centuries. Cardinal Giacomo Gaetani Stefaneschi commissioned Simone Martini to paint frescoes (mostly destr. 1828) in the porch, of which a badly deteriorated Madonna of Humility (c. 1340; Avignon, Pal. Papes & Mus.) survives. In the 14th and the 16th centuries a series of lateral chapels was added to the nave. The Baroque tribune dates from 1671-1672, when the east end was enlarged and the original apse east of the cupola bay was replaced by a choir bay opening on to a polygonal apse.