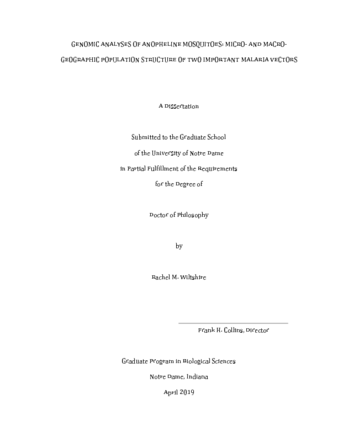 Malaria continues to be a major public health issue. 219 million cases and 435,000 deaths were estimated to have occurred in 2017. Disease transmission is a complex epidemiological interaction comprising causal factors that are dependent on local conditions; however, the host-vector-parasite association remains constant.

This dissertation explored how the genetic and bionomic behaviors of two important anophelines might respond to alternative control interventions in attempts to interrupt sustained malaria transmission.

Genetically modified (GM) mosquitoes have been demonstrated as a form of innovative vector control. To advance into field trials, a genetic assessment of the target population must be conducted. Six Anopheles gambiae populations were sampled from the Lake Victoria basin and sequenced. 5,175 single nucleotide polymorphism (SNP) markers were analyzed. Principal components analysis (PCA) illustrated individuals clustered according to geography with some intersection. Genetic differentiation (FST) was variable with inter-island comparisons having the highest values (0.0480-0.0846). Estimates of effective size were small (124.2-1920.3). These results indicated that three island populations could be candidates for small-scale field testing of GM mosquitoes.

A genome-wide approach to the analysis of population structure has the power to identify genetic processes (such as restricted gene flow or an insecticide-resistant genotype) and the genomic regions that regulate them, providing greater insight into how these mechanisms will impact upon control interventions. A preliminary analysis of 17,757 SNPs across four An. farauti populations in the southwest Pacific confirmed their geographic isolation from each other but also detected a previously unidentified genetic association between, and lack of diversity within, Queensland (Australia) and Vanuatu (PCA, ADMIXTURE). Further detailed analysis of the SNPs contributing to this relationship is recommended.

In Western Province, Solomon Islands, a proportion of An. farauti mosquitoes, which may be contributing to residual transmission, avoid lethal doses of insecticide from long-lasting insecticidal nets. Sugar-fermented yeast was evaluated as an organic source of carbon dioxide (CO2) trap attractant to host-seeking and resting mosquitoes alongside human-produced CO2 and a control. Although the human attracted the greatest numbers (n=349), sugar-fermented yeast (n=210) demonstrated attractiveness, and improvements to the source design i.e. plume composition and delivery, could further enhance its appeal.

Please Note: You may encounter a delay before a download begins. Large or infrequently accessed files can take several minutes to retrieve from our archival storage system.
1 - 7 of 7