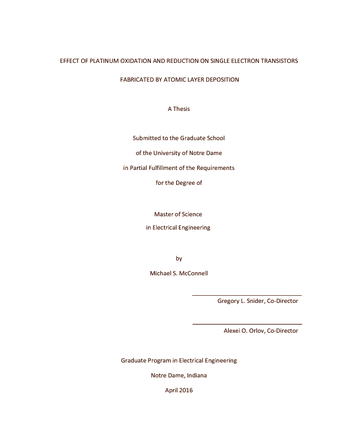 This work describes the fabrication of single electron transistors using electron beam lithography and atomic layer deposition to form nanoscale tunnel transparent junctions of alumina (Al2O3) on platinum nanowires using either water or ozone as the oxygen precursor and trimethylaluminum as the aluminum precursor. Using room temperature, low frequency conductance measurements between the source and drain, it was found that devices fabricated using water had higher conductance than devices fabricated with ozone. Subsequent annealing caused both water- and ozone-based devices to increase in conductance by more than 2 orders of magnitude. Furthermore, comparison of devices at low temperatures (~4 K) showed that annealed devices displayed much closer to the ideal behavior (i.e., constant differential conductance) outside of the Coulomb blockade region and that untreated devices showed nonlinear behavior outside of the Coulomb blockade region (i.e., an increase in differential conductance with source-drain voltage bias). Transmission electron microscopy cross-sectional images showed that annealing did not significantly change device geometry, but energy dispersive x-ray spectroscopy showed an unusually large amount of oxygen in the bottom platinum layer. This suggests that the atomic layer deposition process results in the formation of a thin platinum surface oxide, which either decomposes or is reduced during the anneal step, resulting in a tunnel barrier without the in-series native oxide contribution. Furthermore, the difference between ozone- and water-based devices suggests that ozone promotes atomic layer deposition nucleation by oxidizing the surface but that water relies on physisorption of the precursors. To test this theory, devices were exposed to forming gas at room temperature, which also reduces platinum oxide, and a decrease in resistance was observed, as expected.