The Rise and Fall of Favor-Based Digitization: Workflows Taste Better on a Cake 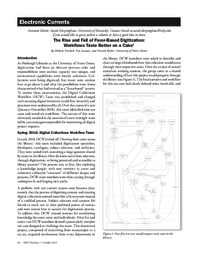 At Hesburgh Libraries at the University of Notre Dame, digitization had been an obscure process: roles and responsibilities were unclear, capacity was opaque, and institutional capabilities were mostly unknown. Collections were being digitized, but many were unclear how to go about it and what the possibilities were. Some characterized what had evolved as a “favor-based” system. To resolve these uncertainties, the Digital Collections Workflow (DCW) Team was established and charged with ensuring digital initiatives could flow smoothly and processes were understood by all. Over the course of a year (January–December 2018), this team identified nine use cases and tested six workflows. The success of this team ultimately resulted in the creation of a new oversight team led by case managers responsible for monitoring all digital project requests.